When Will Wynonna Earp Season 4 Return?

When Will Wynonna Earp Season 4 Return?

Wynonna Earp Season 4 will return in 2021


Bad news bears, everyone. Wynonna Earp is going on hiatus following tonight’s episode (aka Season 4, Episode 6: “Holy War Part Two”). While the Syfy series was lucky enough to get some production in before the outbreak of COVID-19 forced an unexpected stop back in March, the halt meant the season had to be split into two parts. After the sixth episode, Wynonna Earp Season 4 will be going on hiatus until 2021.

This all feels particularly unfair for a season that, if everything had initially gone according to plan, would have already aired. In February 2019, unexpected funding difficulties at IDW Entertainment put the future of the beloved show in question. While the series was eventually saved, thanks to a passionate fan campaign and a new funding plan that has Cineflix Studios as co-producer and Canada’s Crave network as a new production partner, production was delayed in the process. Production on Season 4 did eventually start in January 2020 before halting again in March.

It’s not all bad news, however. Production on Season 4 started up again in late July and, just this week, the cast and crew were hard at work on the final two episodes of the 12-episode season. This means that, while we may have to wait longer than anticipated, we will be getting the rest of Season 4. This past week, Syfy released a trailer for the back half of the season, along with a promise that new episodes would be coming in 2021.

One of the most notable things about the trailer (besides its straight-up creepiness) is the fact that Wynonna Earp‘s Season 4 setting will be different in the second half of the season. I’m talking about the snow, people! While the first six episodes of Season 4 were filmed during a Calgary winter, the second half have been filmed during the summer. In Calgary, these two seasons look… different.

It’s unclear how Wynonna Earp will choose to deal with this obvious and abrupt change. While this show has proven on more than one occasion that it is cool with a time jump, this season has already had one of those, so it feels slightly less likely than usual? Honestly, this show has many more options than other TV shows when it comes to this kind of thing. There are mechanics built into the story’s world that could explain away the change and meet easy acceptance from the viewers. Witch’s spell change the season? Sure, why not! The power of Wayhaught’s love melts all of the snow in the entire Ghost River Triangle? Waverly’s half-angel and these two are hot—stranger things have happened!

We’ll have to wait until sometime in (hopefully early) 2021 to find out how Wynonna Earp is choosing to explain this change in setting. But, honestly, this is an easy, insignificant price to pay for the rest of Season 4. 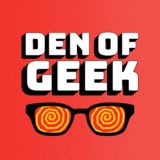