'Hell on Wheels' renewed for third season by AMC

'Hell on Wheels' renewed for third season by AMC

AMC has renewed Western drama Hell on Wheels for a third season. 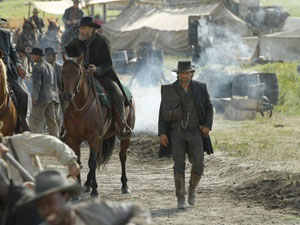 The series - which stars Anson Mount as a former Confederate soldier who works on the first transcontinental railroad - has been picked up for ten more episodes, Deadline reports.

However, show creators Joe and Tony Gayton have stepped down as executive producers with John Shiban (Breaking Bad, The Vampire Diaries) continuing as sole showrunner for the new season.

The second season of Hell on Wheels concluded earlier this month on AMC, attracting 2.2m for the October 7 finale and a season average of 2.4m viewers.

Colm Meaney - who plays Thomas 'Doc' Durant - previously told Digital Spy that working on Hell on Wheels has been a "terrific experience".

"From the network to the studio to the producers, it's been great people to work with," said Meaney. "It's a great cast, we get on well and we're all very happy to develop it to the next level."