'The Newsroom' renewed by HBO for third season

'The Newsroom' renewed by HBO for third season

Jeff Daniels has confirmed that The Newsroom will return for a third season. 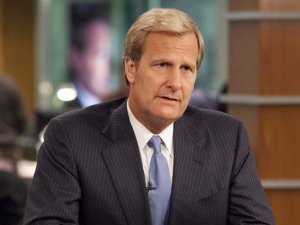 Aaron Sorkin's HBO drama currently has two episodes left to air in its second season, with star Daniels announcing its return next year.

Daniels - who plays lead character Will McAvoy in the drama - tweeted: "It's official. #Newsroom coming back for a Season 3."

Last month, HBO president Michael Lombardo stated that he would be "shocked" if the show was not picked up for a third run.

"We're enormously happy with the show," Lombardo said in July. "It felt like the show was hitting a smart, adult audience that many of our dramas weren't. For a thinking audience, it's appointment viewing."

Jeff Daniels is nominated for 'Best Lead Actor' at the 2013 Emmys, while Jane Fonda is up for 'Guest Actress'.

The Newsroom continues with a two-part election special, beginning on September 8.