'Arrested Development' will only be one series, says Netflix

'Arrested Development' will only be one series, says Netflix

Arrested Development will likely only return for one new series on Netflix, the company's CEO has revealed. 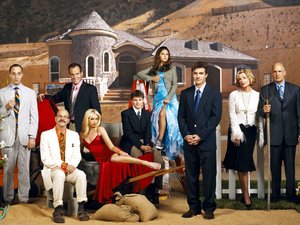 The sitcom will stream a new miniseries on Netflix in the US and the UK in May as a prelude to a potential film about the Bluth family.

Netflix's Reed Hastings has stated that there are currently no plans for the on-demand service to produce a second series following the release of new episodes in May, reports The Wrap.

Speaking at Morgan Stanley's Technology, Media & Telecom Conference in San Francisco on Monday (February 25), Hastings described the new series as one with no chronological placement.

"It's a fantastic one-off," Hastings said. "Think about it as a non-repeatable amazing [event]."

Jason Bateman recently revealed that the show will likely continue in a film after one series.

"There's a big story that the showrunner wants to tell; this guy [creator] Mitch Hurwitz, this smart guy. And the story was too big to kind of... every time he'd try to fit it all in one movie, it wouldn't work," Bateman explained.

He continued: "So he decided to put sort of the first third of it in these episodes we have shot that are going be on Netflix in May, and Act 2 and Act 3 will be inside a movie that we will do later."

Bateman also said that fans can watch the Arrested Development miniseries episodes in whatever order they like, because they are not strictly linear.

"Depending on the order in which you watch them, certain things will be revealed to you or not. It's pretty complicated."