Don't Trust the B---- in Apartment 23 has been pulled from the ABC schedules. 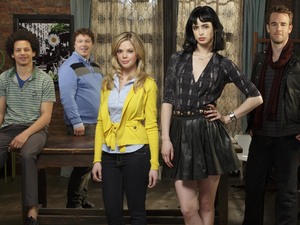 Apartment 23 and its lead-in show Happy Endings had been airing twice a week until last week, when ABC announced that they would be reduced again to airing once a week.

However, Apartment 23 has now been pulled by the ABC network from the schedules effective immediately, while Happy Endings will begin airing back-to-back episodes from January 29.

ABC boss Paul Lee had said earlier in the month that the fate of the show was "undecided" despite low ratings, saying: "We love those two shows. They are watercooler shows. They are really well-written."

He added: "And please, no bashing ABC. While I'm sure no one there would say they think they nailed it when it came to programming #Apt23 this year...

"You've got to give ABC props for ever picking us up in the first place. They took a shot at something original & edgy. I respect them for it."

Re: 'Apartment 23' pulled from ABC schedules

ABC is to release the final unaired episodes of Don't Trust the B---- in Apartment 23 online.

Star Krysten Ritter revealed the news via her WhoSay page.

All eight will be released on ABC.com, iTunes and Hulu on May 17, according to Ritter's post.

In the wake of the show's cancellation, Ritter has signed up for a role in NBC comedy pilot Assistance, while her former co-star James Van Der Beek has joined CBS sitcom pilot Friends With Better Lives.

The final Apartment 23 episode to air on US television was broadcast by ABC on January 15.

E4 aired the first season in the UK, though it is currently unclear if the channel will also be screening season two episodes.