Charlie Sheen says Two And A Half Men could end

Charlie Sheen says Two And A Half Men could end

Charlie Sheen has stoked speculation that his hit sitcom Two And A Half Men could end, saying that if the current series is the last, "so be it". 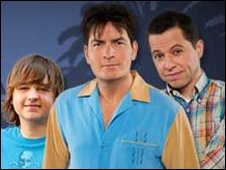 The actor issued a statement after US press speculation that he was demanding a higher salary to continue his role as libidinous bachelor Charlie Harper.

The 44-year-old is due in court to face domestic violence charges in July.

He pleaded not guilty to menacing, criminal mischief and assault in a pre-trial hearing last month.

The charges stem from an alleged altercation with his wife, Brooke Mueller Sheen, on Christmas Day 2009.

At the time, she told police Sheen had put a knife to her throat and threatened to kill her. She has since said she wants the charges dropped.

Reports surfaced earlier this month that Sheen wanted a salary increase before signing up for an eighth series of Two And A Half Men.

Unnamed sources quoted in the US media said he was seeking as much as $1m (£650,000) for every episode of the show.

But in a statement released to People magazine on Friday, the actor said: "All of the numbers reported in the press are false.

"Claims from 'inside sources' regarding offers from the studio as well as my salary, on their best day, are without merit."

The statement came on the last day of filming for the current series - but Sheen denied he was making a last-minute bid for more money.

"Approaching the start of the current season and as far back as June 2009, I submitted my terms for season eight to Warner Bros. and CBS respectfully.

"In no way, has this been a hasty or negligent 11th hour surprise."

However, the star signalled his willingness to walk away from the hit show altogether.

"If tonight's show is the end for me as Charlie Harper, so be it. Another journey has begun," his statement continued.

"I take from the experience 161 shows filled with a kaleidoscope of amazing experiences, memories, friendships and gratitude. I remain humbly inspired - C Sheen."

Warner Bros and CBS, who make the series, were not available for comment.