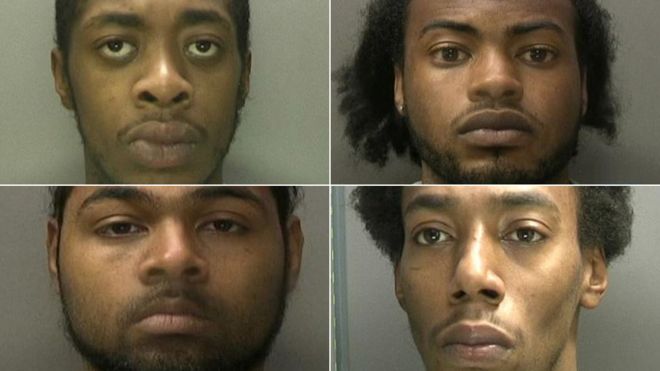 The group tied two women to chairs when they "stormed" a house in Coventry and ransacked it for valuables, police said.

Upon finding a safe in a kitchen cupboard, one of the men put a craft knife to the 10-month-old's neck and demanded the code.

Each member of the gang pleaded guilty to robbery.

West Midlands Police said the raiders fled the house in Cheswick Close, in the Stoke area, with the unopened safe last June.

They eventually prised it open with a crowbar and divided the cash found inside.

However, a "quick-witted" member of the public wrote down the getaway car's registration, leading officers to cousins Joshua Juggan and Malik Ragnatt.

The pair were stopped later that day by armed officers on the M40, and police later found balaclavas, duct tape and about £1,400 when they searched Juggan's Ford Fiesta.

When officers searched their phones, they found messages linking Daniel McKain and Gregory Crockett to the crime.

Despite their guilty pleas, police said none of the men had admitted being the one who threatened the baby.

Ragnatt, 22, of Bensham Lane, Croydon, was the last member of the group to be jailed.

He was give a 10-year sentence at Warwick Crown Court on Wednesday.

The others, who previously admitted robbery, were sentenced as follows:

Det Con Tom Simpson from West Midlands Police, said: "This was a truly sickening case - it's hard to imagine that anyone could stoop so low as to threaten to injure a baby."