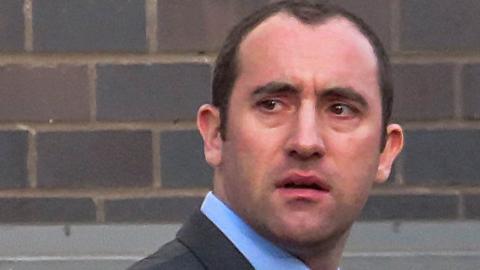 Dr Christopher Ball-Nossa was working at Coventry's University Hospital in June at the time the images were found.

Police found 1,520 indecent images, stills and movies, with some being category A, the most serious of images.

Ball-Nossa, 35, pleaded guilty to six charges of making indecent images of children and was given a two-year community order.

Prosecuting, Anthony Cartin said Ball-Nossa's wife had raised concerns to police about material she found on his laptop when she borrowed it.

He told Warwick Crown Court that having been handed his laptop, police officers arrested Ball-Nossa at his place of work and seized a second laptop from his home.

Mitigating, Richard Gibbs told the court Ball-Nossa had qualified two years previously and had been hoping to work as a GP.

"As a result of these offences, that career has gone," he said.

"He has been suspended by the General Medical Council and will almost certainly be struck off."

Sentencing him, Judge Peter Cooke said some of the images were "no more than posed nudity, but about a seventh of them are appalling images of the abuse of young children".

Ball-Nossa was ordered to register as a sex offender for 10 years and made subject to a sexual harm prevention order for the same period.

A junior doctor has been struck off the medical register after indecent images of children were found on his laptop.

Dr Christopher Ball-Nossa was given a two-year community order at Warwick Crown Court in January after admitting six charges of making indecent images of children.

The Medical Practitioners Tribunal Service has ruled he be erased from the General Medical Council register.

Its panel found there remained a risk of "repetition" of the offence.

At the time of his arrest in June 2018, Ball-Nossa was working at University Hospital Coventry.

His sentencing hearing in court in January was told the 35-year-old's wife had raised concerns to police about material she found on his laptop when she borrowed it.

Police found 1,520 indecent images and movies on his laptop with some being category A, the most serious of images, the hearing was told.

In his witness statement, Ball-Nossa apologised and expressed regret for his actions, the report said.

But, the panel found, although the apology was a "step in the right direction" it had "come very late in the day".

Although rehabilitation requirements were imposed as part of his sentence, remediation will be a "long and hard process" so there remains a "risk of repetition", it added.