The only qualification our pm and mps are good at is being liars to its British citizens about every thing and the citizens fall for it every time.

Dominic Raab, Brexit Secretary, resigns in hammer blow for May 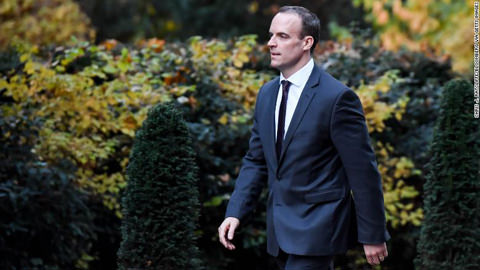 Prime Minister Theresa May was plunged into a new political crisis on Thursday as Brexit Secretary Dominic Raab resigned, just hours after she won approval from her Cabinet for a draft Brexit deal with the European Union.

Raab -- who has been leading Brexit negotiations with the other 27 nations in the bloc -- said he could not "in good conscience" support the deal. News of his departure was swiftly followed by that of two more ministers, Brexit-backing Work and Pensions Secretary Esther McVey, and junior Brexit Minister Suella Braverman.

Raab is the second Brexit secretary to quit in four months. The resignation is particularly significant because it was unexpected; despite being a leading Brexiter he was thought to have been on board with May's plan.

The development is perilous for May because he could tip the balance for other ministers who are considering their positions. If more Cabinet ministers resign, then it's difficult to see how May could hold her government together. His move could also embolden MPs considering whether to trigger a vote of no-confidence in her leadership.

Even before Raab's shock announcement, a junior Cabinet member -- Minister for Northern Ireland Shailesh Vara -- had said he was quitting over the deal put before ministers Wednesday.

In her resignation letter, McVey said the draft agreement "does not honour the referendum" and that she could neither defend it nor vote for it.

So it turns out it wasn't even a finalised deal!

May heading to Brussels amid scramble to finalise Brexit deal

Theresa May will meet EU officials later as the two sides scramble to finalise a Brexit deal in time for Sunday's summit of European leaders.

The EU missed its deadline on Tuesday to complete the text of its declaration on future relations with the UK, amid concerns from several member states.

Stumbling blocks remain over UK access to the EU single market, access to UK waters for EU boats and Gibraltar.

May is an absolute disgrace, a liar and deceiver. She must be removed from office before she does any more damage.

The conservatives are finished Rebbonk for at least two decades according to their members who have withdrawn their memberships swearing never to vote for them again . Most think Merkle already has planned the deal with May when they both were in Africa.

As for fishing rights Nicola Stergeon said on TV a good while ago May had already given them away again shortly after May went to meet her.
dutchman

MPs of all parties accused Theresa May of delivering a “blindfold Brexit” after she admitted her deal left the public in the dark on a range of vital questions about Britain’s future.

Decisions about future trade, the Irish border backstop, fisheries and whether the UK will remain tied to EU rules until after the next general election have all been shelved, a 26-page “political declaration” struck with the EU revealed.

The admission came as the deal still looked doomed to defeat in a landmark vote next month – as both pro- and anti-EU Tories attacked it during feisty Commons exchanges in which few supporters spoke up.

Significantly, two leading Brexiteers praised by Ms May for working with her on the document – Iain Duncan Smith and Owen Paterson – said they could not back it unless the backstop was stripped out.

MPs protested that key decisions had been kicked down the road in crucial areas, including:

* Future trade – where Ms May admitted the UK would “choose” later from “a spectrum”, balancing access to the EU against imposing greater controls.

* The backstop – MPs will vote, in June 2020, whether to trigger the safeguard to prevent the return of checks at the Irish border, by the UK staying in the EU’s customs territory.

* Ending the transition – which is due to run until December 2020, but could be extended until the end of 2022, past the June 2022 election, if MPs choose that option over triggering the backstop.

Downing Street insisted it had “won” the right to end the transition at any point over the two-year period, but admitted the UK could yet be locked in until the end of it.

* Fisheries – future talks will decide whether EU boats still have access to UK waters in return for the UK enjoying tariff-free access to EU markets.

Ross Thomson, a Scottish Tory MP, protested the deal meant “sovereignty over our waters sacrificed for a trade deal” – a fear heightened by Sabine Weyand, EU negotiator Michel Barnier’s deputy, saying it “covers both access to waters and market access”.

The flimsy document fell far short of the extensive draft trade deal originally promised by the government before exit day next March – and has no legal force. 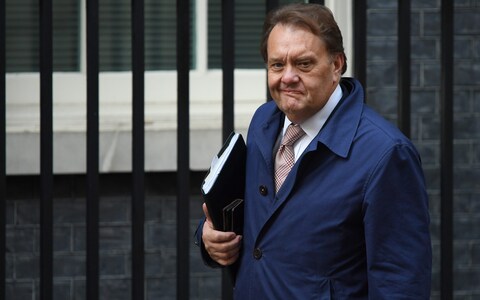 Theresa May was accused of "cronyism" after she handed a knighthood to a Leave-supporting Conservative MP weeks before a Commons key vote on her Brexit deal.

Number 10 announced yesterday that John Hayes, the Conservative MP for South Holland and The Deepings, is to be awarded a knighthood by the Queen prompting an outcry from other Brexit-backing Tory MPs.

There was speculation last night that Number 10 will seek to announce more honours – or make pledges for further honours – to more Tory MPs ahead MPs’ meaningful vote on Mrs May’s Brexit agreement in just over a fortnight’s time.

Mrs May’s deal looks almost certain to be defeated if Labour fail to support it with as many as 90 Conservative...

She took to a radio phone in yesterday trying to reach out to the people. I assume she thought that those calling wouldn't be as well attuned to things as MPs. - She got it wrong!

The sooner she is removed from office the better. Trouble is, who would replace her? I see a complete lack of ability and talent within the halls of Westminster.
dutchman

Boris is the only candidate who has the support of the DUP so is the only one who could form a majority government.
Melisandre

Personally Borris wants free movement according this. In my opinion I would nt trust any of them to be fit to take it on.
https://www.google.co.uk/amp/s/amp.theg ... sadors-say
Write comments
Switch to full style