The government has delayed publication of key Brexit legislation as the prime minister listens to MPs' "concerns" about the bill.

Theresa May had told MPs the Withdrawal Agreement Bill (WAB) would be published on Friday, but the government now plans to publish the legislation in the week commencing 3 June.

It comes amid feverish speculation the prime minister could imminently announce her resignation, with Mrs May due to hold a crunch meeting with the leader of Tory backbenchers tomorrow.

Anger among Conservative MPs at the terms of the WAB, which puts the prime minister's Brexit deal into law, has prompted renewed calls for Mrs May's departure.

Leader of the House of Commons Andrea Leadsom resigned from cabinet on Wednesday evening, after telling the prime minister she couldn't support the bill.

Tory whip Mark Spencer, who stood in for the departed Ms Leadsom at the House of Commons' weekly business statement on Thursday, suggested a planned debate and vote on the bill could also be delayed.

He told MPs: "We'd hoped to hold second reading on Friday 7 June and at the moment we've not secured agreement to this in the usual channels."

rebbonk wrote:This is going to turn out a BREXIT in name only. May is selling us all down the river, and very cheaply!

How right you were Rebbonk but not just May. I knew not to trust any of them including Farage hence why I did nt vote this time in the EU election.

Nigel Farage claims Boris Johnson's deal is 'not great, not new and not Brexit' 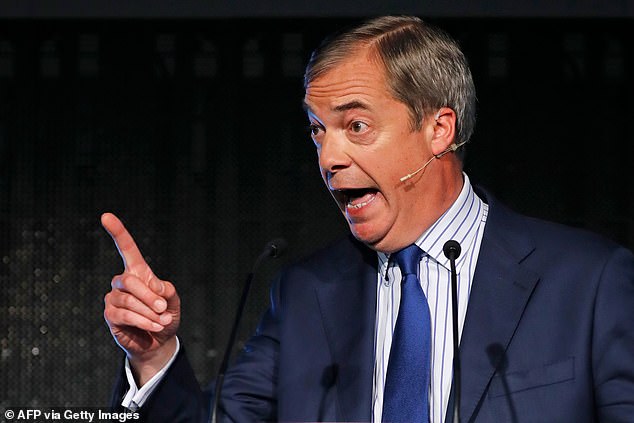 Nigel Farage has slammed the Prime Minister's Brexit deal as a 'reheated' version of Theresa May's 'appalling' agreement - as he urges MPs to reject it today.

The Brexit Party leader, who favours a No Deal exit, is advocating a 'clean-break' from the European Union and claims the current deal will not respect the referendum result.

It comes as Boris Johnson last night urged MPs to back his Brexit deal as he continued a last-ditch push to win over Tory Spartans, ex-rebels and Labour backbenchers.

There will be an extraordinary sitting of Parliament today - the first on a weekend since April 1982 - to discuss the new Brexit deal.

But Mr Farage, taking out an advertisement in The Daily Telegraph, said: 'Mr Johnson plans to reheat most of Theresa May's appalling withdrawal agreement.

'Mrs Mays deal would imprison Britain under EU rules with no vote, no voice, no veto - and no way out'.

He added that the Prime Minister claims his deal is different due to the removal of the Irish backstop and its freeing the UK from the EU customs union - but he said that was 'not nearly good enough'.

'Boris' reheated deal means the UK will still be trapped under EU rules on everything from state aid and taxation to fishing,' he said.

'European laws can still overule our laws, we'll be tied to EU military and foreign policy, and paying at least £39bn for the privilege.'

Mr Farage said that should MPs vote for the deal, they'll lock the UK in a transition period for more than three years.

It comes as Nigel Farage blasted Mr Johnson's deal on the eve of the crunch parliament vote at a Brexit Party event yesterday evening.

The Brexiteer took to the stage and savaged the deal the PM managed to agree with Brussels on Thursday, saying 'this is not what we voted for.'

Mr Farage said: 'If we sign up to this and head down this new negotiation and if the prime minister wants to succeed, then we would never ever able to become more competitive than our European neighbours.

'Never able to seek that opportunity of becoming richer and more successful. And what it means, is that in vast swatches of our national life we will not be making our own laws, for our own people, in our own industries, will have to conform to European Union laws.

Mr Farage also suggested he would 'much rather have an extension' than support Mr Johnson's deal.

On balance, I think I'm with Farage.
dutchman 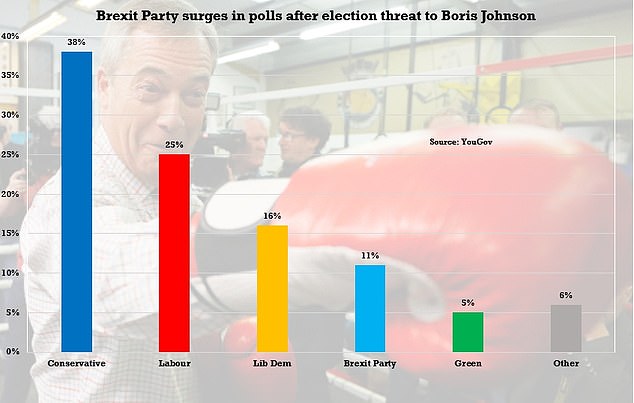 Nigel Farage's Brexit Party has dented both the Tories and Labour after deciding to contest the general election in seats across the country, a new poll suggests.

The eurosceptic upstart surged four per cent in a new YouGov survey of voting intentions.

Boris Johnson's Tories were down one per cent at 38 per cent, while Labour had lost two per cent in falling to just 25 per cent.

It comes after Mr Farage took aim at the two parties and revealed 600 candidates to stand across mainland Britain.

The Brexit Party is now on 11 per cent, just five per cent behind the Liberal Democrats, who were unchanged on 16 per cent.

Mr Farage came out fighting today, taking a swing at Boris Johnson as he hit the campaign trail in a boxing ring.

The Brexit Party leader accused the Prime Minister of chasing a 'Remainer's Brexit' - a jab at the Brexit deal he agreed with Brussels.

Mr Farage was in Bolsover at the start of a tour of Labour-voting Leave seats he believes his party can take from Jeremy Corbyn's party.

The Derbyshire seat of veteran firebrand Dennis Skinner voted 70 per cent to Leave in 2016.

'Ninty five per cent of what Boris Johnson is trying to sell as his great new deal is actually the bad old treaty,' he said, adding: 'Without the Brexit Party we will not get a genuine Brexit, and I am going to make sure this cause is best prepared for elections across the country.'

These polls are generally a waste of time taken in isolation. I have yet to meet anyone who has anything but utter disdain for Swinson, despite what the polls say. But of course, media will continue to peddle them for their own ends.

This one is going to be settled on the day and there are going to be a few disappointed people around, not to mention red-faced pundits.
dutchman

Brexit Party will not stand in Tory seats 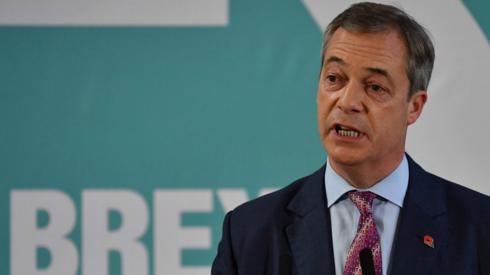 The Brexit Party has announced that it will not stand candidates in the 317 seats won by the Conservatives at the 2017 general election.

Party leader Nigel Farage said standing candidates across the country could increase the chances of another EU referendum taking place.

But he said the party would stand against all other parties - and focus on taking seats off Labour.

It had vowed to stand more than 600 candidates. The Commons has 650 seats.

Launched in April, the Brexit Party does not hold any Commons seats - but the party was the clear winner in the UK's European elections in May.

Prime Minister Boris Johnson welcomed the move, calling it "a recognition that there's only one way to get Brexit done, and that's to vote for the Conservatives".

But Tory chairman James Cleverly added there was still a "danger" the Brexit Party could split the vote in target seats, leading to the election of MPs who could "frustrate the Brexit process".

Explaining his decision to supporters in Hartlepool, Mr Farage said Mr Johnson had recently signalled a "big shift of position" in his approach to Brexit.

He cited a pledge by the PM not to extend the transition period that would follow the UK's departure from the EU. This would see Britain sticking to the European Union's rules on issues such as freedom of movement until December 2020.

Mr Farage also said he was encouraged by recent commitments from Mr Johnson to seek further divergence from EU rules in a post-Brexit trade deal.

He added that this was a "huge change" from the kind of trade pact that had been planned under former PM Theresa May.

Trust Johnson at your peril! Johnson has one loyalty, and it ain't to Brexit.

I can see how this might backfire. People didn't vote Brexit in order to prop up a Tory government, they voted Brexit becuase they wanted Brexit.

Boris Johnson appears to believe the UK will be legally out of the EU after January 31, if he wins the General Election.

Appearing on ITV’s Peston on Wednesday night, the prime minister insisted that everyone will stop talking about Brexit after the new year because ‘we’ll legally be out’ of the bloc.

The PM and the broadcaster’s political editor, Robert Peston, clashed dramatically, after the journalist pointed out that the UK will be in a transition period after January 2020 and is still subject to EU law.

‘We have taken back control, we are legally outside the jurisdiction of the EU… We are able to begin the work of doing free trade deals.’

Taken aback by the comments, Mr Peston argued: ‘No, we’re not out until we’re through the transition… No, you know this.

‘Come on, you know that we’re not out properly until we’re through the transition… We’re still subject to EU rule making, even new directives we’re subject to.’

The PM retorted that the UK could choose to terminate the transition period at any time and would then legally be outside of EU jurisdiction, but if he chooses to do so ‘the decision is ours’ and ‘it’s a fantastic moment for this country’.

Mr Peston continued to ask when ‘are we coming out then?’, to which Mr Johnson admits: ‘Well the transition period ends, as you know, by the end of 2020.’

The PM insisted that everybody will stop talking about Brexit after the end of January.

But the interviewer suggested that the PM could not achieve Brexit within a year and held up a huge stack of documents, pointing out how long it took to negotiate Theresa May’s deal and a Canadian free trade deal.