Theresa May's cabinet agrees a Brexit proposal to take to the EU, 16 months after Article 50 was triggered 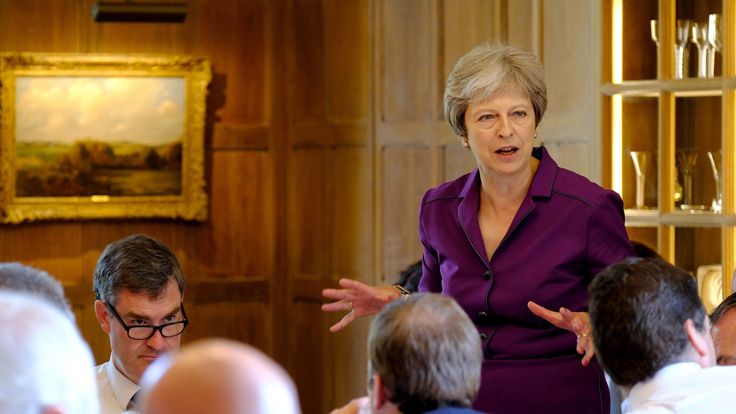 Brexiteers and Remainers have branded the cabinet's new Brexit plan a "sell out" and a "stitch-up", while businesses welcomed the "unified approach".

After a day of thrashing out a trade and customs proposal to take to the EU, Theresa May's cabinet agreed a 12-point plan which includes a new UK-EU free trade area for goods.

As the details were revealed on Friday night - 16 months after Article 50 was triggered to leave the EU - several MPs spoke of their disapproval, but businesses appeared to welcome the proposal.

Shadow Brexit secretary Sir Keir Starmer: "It is farcical that it has taken two years for the Cabinet to even attempt to agree a position on the basics of our future relationship with the EU.

"On previous form, whatever has apparently been agreed will struggle to survive contact with Tory MPs and members.

"This looks like a sticking plaster rather than the Government's final position. With just a matter of months of the negotiations left, Theresa May's ability to deliver Brexit continues to be in doubt."

Former UKIP leader Nigel Farage: "Brexit did not mean keeping the 90% of our economy that does not export to the EU trapped by their laws.

"This is a sell-out to the global corporates, as it was during Maastricht.

"The Tory Eurosceptics are a waste of space. No resignations means that the so-called Brexiteers in Cabinet don't have a principle between them, career politicians all."

Labour MP and People's Vote backer Chuka Umunna: "After two years of wasted time, and of big egos putting themselves ahead of the country, we're left with yet another behind-closed-doors stitch up that would leave us all worse off and which doesn't resolve many of the fundamental problems created by Brexit.

"No one should be in any doubt: the proposal on offer from the Government would represent a bad deal for our country, will create huge added bureaucracy and costs for business, and is highly unlikely to be accepted by the EU.

"How ever anyone voted in the 2016 referendum they should be furious at this Government stitch-up.

"This only confirms how important it is that we have a People's Vote on whatever botched Brexit deal the government comes up with, so the people of this country can decide whether or not it's good enough."

Tory MP Andrea Jenkyns, who quit as a minister to speak out over Brexit: "Common Rule Book: so British businesses will continue to be a rule taker from the EU. I hope the details are better than the breaking headlines. Pray God."

Ms Jenkyns added that she would be willing to help trigger a leadership contest if the deal left the UK "one foot in, one foot out" of the EU.

"I am not a hypocrite," she told the BBC.

"I am standing up for the 17.4 million people who wanted these red lines and who wanted to ensure we did not have a half in-half out Brexit."

"I think her cunning plan is to make everything so complex that nobody has a clue any more what she's on about.

"EEA remains the only viable option, as she will learn to her cost."

Treason May must go

Your not the only one Rebbonk saying she must go a lot of public replies say the same for quite a while now calling her and others traitors to Britain.. . being on the side of Soros and his likes he is the man not long ago nearly bankrupted this country reading public replies hence why I never buy from Costa which he owns the public are boycotting buying EU goods.

Yesterday s news Trump to lift steel tarrifs for Britain to make Britain boom in next weeks USA meeting here I think the USA might change their minds now.
dutchman

Melisandre wrote:Yesterday s news Trump to lift steel tarrifs for Britain to make Britain boom in next weeks USA meeting here I think the USA might change their minds now.

Yes very likely. Also consumers in Britain will still be forced to pay punitive taxes on personal imports from the USA such as DVDs ordered from Amazon.com.

May has nailed Britain's flag to the mast of the sinking EU ship.
Melisandre

Yes I know of the taxes and postage thank you Dutchman.

You mean the TRAITOR has nailed Britains flag as democracy is with the will of the people not her nor parliament nor the unelected lords who only care about their money they will loose especially Heseltine . They should go back to learning the Magna Carta but of course she has proven she is not a learned person by her last job post now this one too. Seems she has more interest in her husband deals and businesses one is G4 another I ve heard is in Canabis oil which with the French.. The public say its the end of Conservative they will never vote again for them and said May might think the voters will soon forget but they wont nor will they be voting for Lib Lab either. .
Last edited by Melisandre on Mon Jul 09, 2018 12:22 pm, edited 2 times in total.
dutchman

It's going to be rejected in any case. The EU is not going to accept any deal which doesn't leave the UK significantly worse off than it is now and certainly not one in which Britain occupies a 'special relationship' with the EU.
rebbonk

I heavily suspect (hope) that you are right Dutchman.

But whatever happens, Treason May (and her cabinet) has shown total contempt for the UK's democratic process. I hope we see some real fireworks in Parliament over this, but I'll not be holding my breath because they're all in it for what they can get out of it.

It would be nice if we had a real opposition, but sadly that is not the case.

A rather poor state of affairs all round.
Melisandre

Perhaps we will walk then no deal. I know most of the EU want us to fail I watched the EU council after we voted out Spain in perticular wanted us to fail most of all.

To me personally I believe its a business game the rich boys play with our lives Soros Rothchilds some of the controlers of the world even our and other Builderburgers etc . They all gather to have world meetings in the EU all pally with each other no press allowed in you see Trump and Putin friendly with each other same with May with French and German leaders . Governments even support sports to keep us pre occupied from what they are up to behind our backs.
Last edited by Melisandre on Sat Jul 07, 2018 9:52 pm, edited 1 time in total.
Melisandre

rebbonk wrote:
It would be nice if we had a real opposition, but sadly that is not the case..

That's because Labour is broke I was told this when Conservatives first got in by a woman who sits in the house of commons she was part of Labours think tank the Fabian Society.

The brown sticky smelly stuff has started to fly...