Phones 4u collapse: 50 jobs go as axe falls on stores in Coventry and Warwickshire

Fifty jobs will be axed across Coventry and Warwickshire after all local Phones 4u stores failed to attract a buyer.

Administrators announced a total of 362 permanent store closures across the UK - resulting in the immediate loss of 1,697 jobs, including 36 local redundancies. Another 720 people have been retained in the short term - including a further 14 workers in Coventry and Warwickshire - to assist with the closure programme.

Among the closures are shops in Coventry’s Market Way , Warwickshire Shopping Park and the Arena Park shopping complex.

Phones 4u concession outlets in Currys/PC World at the city’s Airport Retail Park and Junction One Retail Park in Rugby have also closed but all ten employees have been transferred to Dixons Carphone as part of a deal secured last week.

Almost as many stores closed across Coventry and Warwickshire during the first six months of this year than the whole of 2013.

And Nuneaton has already lost more shops in the first half of this year than the previous year, with the figure already reaching 15 compared to 12 during 2013.

These latest findings also fail to take into account a number of high-profile store closures during August and September, including the national chain Phones 4u.

The new research from PricewaterhouseCoopers, which was compiled by the Local Data Company, revealed the gulf between openings and closures has widened – with closures remaining high alongside significantly fewer new stores.

In Coventry, the number of new shops opened in the first half of the year was 13 and only seven in Nuneaton, although some of the new openings have been big names.

In Rugby, the figures were level with the number of closures and new openings standing at eight this year compared to 16 losses and 12 gains during 2013.

Leamington is one of the region’s few high street winners with only two retailers lost from the town this year, compared to 27 last year.

The research has also revealed the biggest retailer losers are both men and women’s fashion shops, mobile phone retailers and video libraries.

Rob Hunt, of PwC in the Midlands, said: “I expect to see multiple retailers continue to approach openings in town centres very cautiously.

“This is likely to mean shorter-term leases and more temporary pop up type formats, particularly in secondary locations.”

In July, lingerie chain La Senza went into administration for the second time in just over two years, which resulted in the loss of shops across Coventry and Warwickshire.

Nuneaton also lost its Dorothy Perkins store in the town’s Market Place during the summer and 40 jobs were lost in Coventry when Homebase closed its big store in Walsgrave. 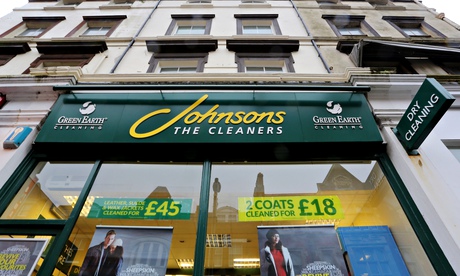 The company behind Johnson Cleaners, Britain’s largest dry-cleaning chain, plans to shut more than a third of its 307 high street outlets, with the likely loss of about 450 jobs.

Citing a “difficult high street environment”, Johnson Service Group said it will close 109 high street stores in the next six months, the second wave after more than 100 branch closures in 2012. About 450 jobs are thought to be affected. A typical store employs four to five people, many of whom work part-time. The company is moving away from the high street to more car-friendly locations such as supermarkets and petrol stations, to keep up with changing shopping patterns.

A spokesman said: “People want convenience: they want to drive and drop off their dry-cleaning. It’s another example of how the high street doesn’t seem as popular any more.”

The Cheshire company has been opening new outlets in Waitrose supermarkets and now has 78, with plans to add another 46 in the next three months. Johnson is also testing stores in garage forecourts and has set up collection and delivery points in large offices. It plans to launch a new online home and delivery service for valuable or bulky items this summer.

The firm did not disclose which branches will close, as consultation with staff is only just beginning. The majority of the 109 branches earmarked for closure have leases expiring within the next two years.

Can't speak for anyone else but it's a lot easier for me to drop off my dry cleaning at the supermarket.
dutchman

Tesco is shutting its head office along with 43 unprofitable stores as part of a raft of drastic new measures as new boss Dave Lewis fights to turn around the ailing supermarket's fortunes.

Britain's biggest retailer made the dramatic announcement as it revealed like-for-like sales for the 19 weeks to January 3, including the Christmas period, fell by 2.9%. The grocer is also closing its final salary pension scheme and shutting its historic HQ in Cheshunt, the Hertfordshire town that has been its home since 1973, to move to Welwyn Garden City in 2016.

Employees will start to learn over coming months which stores will be shut and how many jobs will be lost as Tesco begins consultations with those affected with full details set to be known by April.

Lewis said he understood how the announcement would hit "hard-working people", adding: "I am not immune to the impact of the decisions we have had to take on our colleagues."

The Tesco chief also revealed that he was writing to 49 communities to reveal that "with a heavy heart" it was pulling out of new store-building projects.

Tesco are reaping as they've sown.

For years they have used sharp and misleading tactics on pricing: to my mind, they deserve all they get.

Sadly though, it's those at the bottom that will pay for the underhanded and incompetent management that have allowed this situation to develop.
dutchman

Bedworth Homebase to close its doors

THE BEDWORTH branch of a popular home improvements store is to close its doors after decades of trading in the town.

Homebase in Newtown Road will be shutting up shop on Saturday, February 21 after serving customers for many years.

Discussions are currently ongoing between the company and its employees as to their future with the business and to find them suitable alternatives for employment.

It is understood that some employees may be able to secure transfers to other nearby Homebase branches or Argos stores.

A statement from the national chain said: “Following a consultation with colleagues, Homebase can confirm that its store in Homebase Bedworth on Newtown Road will close on Saturday, February 21 2015.

“Discussions are being held with colleagues to find alternative employment in neighbouring Homebase and Argos stores.”

It is still unclear what the site will be used for or if a developer has agreed to take on the land.

After the closing date shoppers will have to travel to Coventry to buy items from the store.

The spokesperson added: “We remain committed to serving the local community, with customers able to visit our neighbouring Homebase store in Coventry Canley (6.4 miles) or buy items for home delivery through www. homebase.co.uk.”

The spokesperson added: “We remain committed to serving the local community...

Coventry and Warwickshire saw almost 90 shops disappear from its high streets last year, according to the latest figures.

But the region welcomed 62 new stores during 2014 – meaning that overall there were almost 30 fewer shops across town centres and the city at the start of the year.

According to PwC research, which was compiled by the Local Data Company, a total of 30 stores closed last year in Coventry, compared to just 19 new shops opening – resulting in a loss of 11 retailers in the city.

The picture was much the same across Warwickshire – with Nuneaton also losing 11 shops overall, as 18 closed and only seven opened in the town.

Stratford was the only town in the region to buck the trend, with three additional shops opening overall last year. The town lost nine retailers but welcomed a further 12 new stores.

The research also showed that West Midlands as a whole had fewer stores opening than closing during 2014, with 524 outlets closed compared to 371 openings. This equates to a net reduction of 153 shops across the region.

It also showed that charity shops, e-cigarettes outlets, jewellers, shoe shops, financial advisors, coffee shops and discount stores were among those opening the most branches during 2014.

More than 200 shops and 7,500 jobs are at risk at Britain’s biggest out-of-town retailers as the dramatic change in shopping habits leads to widespread store closures.

An analysis by The Sunday Telegraph shows that over the past six months the major out-of-town retailers — primarily supermarkets and DIY chains — have announced the closure of 216 stores and put 7,500 jobs under threat as a result.

In addition, almost 100 proposed new store developments have been scrapped.

The scale of the closures and potential job losses shows how the pressure on Britain’s high streets has spread out.

Last week, Kingfisher said it would close one in six B&Q stores over the next two years, putting 3,000 jobs at risk. B&Q has been battling against slow DIY sales and bosses believe it now has too many UK stores.

Homebase said late last year that it would close 80 shops, the equivalent of one in four, which sparked questions about the future of Britain’s home improvement market and put an estimated 3,000 jobs at risk.

The other closures include 43 by Tesco and 33 by Morrisons, which between them threaten 2,500 jobs.

Shoe retailer Brantano has gone into administration, throwing its Coventry store into doubt, with thousands of jobs across the country at risk.

The shoe retailer employs over 2,000 nationwide in 140 shops, one of which is situated at Coventry city centre's Central Six Retail Park, opposite Coventry Rail Station.

Three months ago, the chain was bought by a specialist retail investor - but has hit problems in a difficult trading market.

Administrator PwC said Brantano's website and store network would continue to trade as normal for now.