As many retailers are finding, they can't sell online if they have no offline presence. People like to see what's on offer, then buy online because it's cheaper. - Retailers that understand this and adapt appropriately will survive. Others may well whither.
Melisandre

I know lots of people buy off line with no off line presence Rebbonk I don't see it any different to years ago ordering out of catalogues which people still do which I have found men use more also off line. Its mainly computer games electrical things they like to see in shops prior .

Not shops but business troubles that may well affect the local economy...

Capita shares have dropped heavily (40%) after a profits warning. Carrillion over again? https://uk.reuters.com/article/uk-capita-outlook/capita-shares-crash-40-percent-as-uk-outsourcer-cuts-forecasts-idUKKBN1FK0Q7

M&S have announced closure of another 14 stores. Will Coventry remain unscathed? https://uk.reuters.com/article/uk-m-s-stores/ms-to-close-14-more-uk-stores-as-it-speeds-up-change-idUKKBN1FK127
dutchman

Anyone with personal experience of Capita won't be sad to see the back of them.

TGI Fridays restaurants in Britain are facing an uncertain future.

Electra Private Equity, which has owned the American-themed eateries since 2014, may sell the brand in a worrying trend for the dining sector.

TGI Fridays operates more than 80 branches in the UK, including one in Coventry.

Sources told Sky News a sale was one option that would be explored by Electra.

But Electra would also examine whether to use its financial firepower to acquire rival chains which had been hit by financial distress, the outlet added.

The American-style restaurant chain first opened in New York in 1965 and arrived in Britain in the 1980s.

It now operates from 80 sites nationwide. 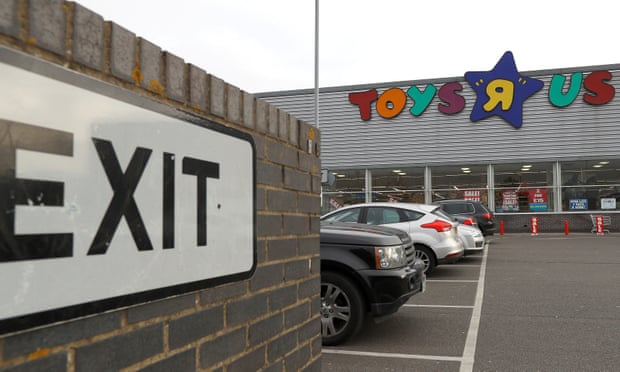 Toys R Us is expected to tumble into administration next week after last ditch talks to find a buyer faltered.

The move will put 3,200 jobs at risk and follows the recent decision by its bankrupt American parent to try to sell the loss-making UK business as well its other European stores.

Members of the Toys R Us management team met with officials from the Pension Protection Fund (PPF) on Friday to notify them of the development. The troubled retailer had been trying to drum up a buyer before the end of the month when several payments, including a £15m VAT bill, fall due.

The company is expected to appoint restructuring firm Moorfields on Tuesday unless a white knight rescue bid emerges over the weekend. Moorfields has been put on standby to handle the process, according to Sky News which first reported the development.

In September Toys R Us’s American parent filed for bankruptcy protection in the US and Canada after running up $5bn (£3.7bn) of debts and struggling to compete online. It is trying to restructure its finances and is closing hundreds of US stores.

The UK chain has been struggling for the same reasons as its parent, with shoppers shunning the large out-of-town sheds synonymous with the Toys R Us brand in favour of buying online or from supermarkets. The retailer’s most recent accounts showed an operating loss of £500,000 on sales of £418m.

In December the UK chain won a stay of execution after landlords took back the keys to 26 of its 104 shops and accepted less rent for those that stayed open. But the turnaround plan was torn up after poor trading continued into the new year.

Administration would be bad news for the 600 members of the retailer’s pension scheme. The fund has a deficit of about £30m based on an assessment by the PPF, the state-backed pensions lifeboat, but as much as £93m on the basis of a buyout by an insurer. If the retailer goes bust the pension fund would be an unsecured creditor alongside its landlords and HMRC and therefore at the end of the queue to collect money owed.

Toys R Us shoppers warned to use gift cards NOW

All stores will continue trading until further notice - however customers are being warned to act now if they have gift cards - as the fate of the chain enters the hands of administrators Moorfields Advisory Limited.

Gift cards and vouchers will continue to be honoured whilst stores continue to trade, but customers are encouraged to redeem them as soon as possible to minimise losses.

The administrator said no further gift cards will be sold from today "given the current levels of promotional activity".

Deposits paid by customers under its newly-launched 'Take Time to Pay' scheme will be honoured provided that the outstanding balance is paid and the goods collected by 11 March 2018.

Alternatively, customers can use their deposits towards the cost of any in-store purchases provided that these are also completed by 11 March 2018.

Shoppers will no longer be able to order goods online or use the "click and collect" tool. All current orders will be fulfilled, "subject to the stock continuing to be available".

On its website, Toys 'R' Us posted a special message to shoppers on Wednesday stating: "No exchanges for non-faulty items may be accepted and no refunds will be given."

The chain has also confirmed that gift cards will be accepted but no refunds will be given on outstanding balances, so customers should use them up now to avoid being left short-changed.