Retail history could be made in the UK today with analysts predicting the busiest shopping day ever recorded. 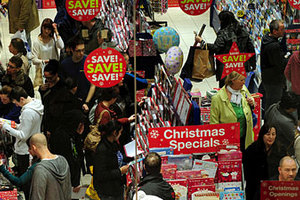 Visa Europe believes that the nation’s shoppers will use its cards to spend over £1m a minute, nearly £18,000 per second – totalling £1.5bn across the day.

The company maintains that the record spend will equate to year-on-year growth of around 8%.

But the British Retail Consortium sounded a warning note for its members, many of whom are struggling in the midst of a challenging economy.

Director general Stephen Robertson said: “After a late start to Christmas buying, consumers were out on the streets in greater number than for the same week in 2010, although the big question is whether it has translated into enough spending to make up for a largely disappointing year.

“Retailers have been working hard to encourage people into their stores, running exceptionally high levels of promotions and discounts.

Mr Robertson added: “They will be relieved to see that effort paying off, but for some, the season still hangs in the balance.

“Many sales are being made at the expense of margins and good trading.”

The so-called ‘man dash’ of men doing last minute shopping is expected to be a major factor, according to some of the big retailers.

John Lewis said purchases of lingerie, fragrance and speciality chocolates had soared at its department stores, with warm pyjamas also popular despite weather forecasters’ predictions of a mild Christmas.

Selfridges is expected to see a similar trend, with West End retailers pointing to figures from past years suggesting 80% of men leave their Christmas shopping to the 11th hour.

But while December 23 may be the biggest shopping day overall, Visa predicts that the busiest shopping hour of the year will be on Christmas Eve between noon and 1pm, in a final flurry of activity before Christmas Day.

A rash of discounts and sales is likely to hit profit margins as stores fight to entice cash-strapped shoppers through their doors.

Shopping comparison website Kelkoo said the average family spend this festive season will be close to £700.

Online sales are expected to soar by about 16% to £13.4bn this Christmas compared to last year, and in comparison to a 2% fall on the high street, according to the report.

StevieG wrote:Still reckon a lot of businesses going to the wall in the New Year

Agreed. As the first quarter rents fall due they'll be falling like nine-pins again.
rebbonk

La Senza to close shops in Leamington and Rugby

LINGERIE chain La Senza is closing two of its shops in Leamington and Rugby.

More than 80 of the firm’s 146 UK stores are facing the axe, including Leamington and Rugby.

The company blames tough trading conditions and is set to appoint administrators.

About 60 other shops are poised to be bought by Arabian retail group Alshaya.

According to the Daily Mail, RBS are to blame over Peacocks

Reading some of the closure notices on shops in the city centre this morning:

'Past Times' (Lwr Precinct) "Use our Leamington branch"

Leamington seems to be a popular place????
Write comments
Switch to full style