One of Coventry's biggest music venues is set for a major change - as it moves to a new location in the city centre.

The Empire, which currently calls Far Gosford Street its home, will be moving later this year as part of massive expansion plans.

It will soon be located on Hertford Street, in what was once the Cannon Cinema and the ABC Cinema and more recently JJB Sports and DW Sports.

The move into the unit, which has remained empty since the closure of the sports store, will see the capacity of The Empire increase from 900 to 1,500.

Owner Phil Rooney has revealed that they are planning to be up and running by August or September, though the ongoing coronavirus pandemic could alter the timeline.

Plans to upsize The Empire have been in the pipeline for some time, with Coventry City Council and The City of Culture assisting venue bosses - the latter supplying a £40,000 investment which will see City of Culture 2021 activities and events take place at the new venue.

Artists impressions of the brand new Empire venue show that it is set to have a balcony bar which overlooks Hertford Street.

Floor plans also show that the venue will have two rooms - a large concert space, and a smaller room for more intimate shows.

It also shows that the space can be configured as exhibition space or even as a banqueting suite.

And venue bosses hope to be able to attract bigger names and larger crowds - in a similar vein to O2 Academy sized venues that are dotted in cities across the UK.

Speaking to CoventryLive, Mr Rooney said: "We're hoping to have the new Empire open by August/September, hopefully a little earlier. All existing shows, apart from a couple in June, have been moved from Gosford Street to the new venue.

"When it opens, the starting capacity will be 1500, because we want to see how the venue flows. That'll take around six months, and it will be an evolving thing. I'd like to see it get to 1,800 eventually.

"It's a much stronger location. We should be able to put on bigger shows and get bigger names. We want to get people into the city - who will spend money elsewhere in the city when they are here.

"Eventually, the diary will expand. At the minute, we're a bit limited with the space at the Empire, but we want to put on bigger shows, and some comedy nights.

"Once we're open we'll do a couple of open days to let people come and have a look. We want to work with local community groups too."

So back where it started then? 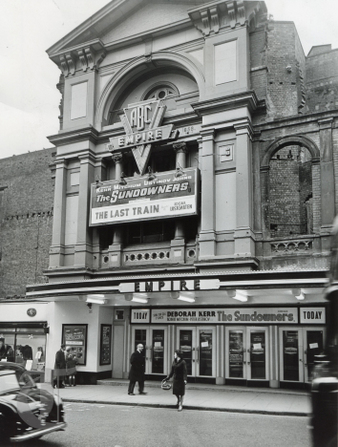 The building wont look as grand as this old one

Yes I spent many time in there as a kid we use to send one friend in to open the side exit down the alley by the inside toilets to get in free.

It was owned by a local doctor Melisandre and at one time included a pharmacy, restaurant, Austin reed showroom and dance school!

After it was bombed the pharmacy moved to a temporary shop in the high street but the owner campaigned hard to have it move back next door to the cinema.

It's sad to see the state of the former Crown/Paris, at one time the poshest cinema in the city:

It's a shame and in my opinion most remodernisation never is as good as the old.

Coventry's soon-to-be newest music venue has announced a blockbuster gig to finish off 2020.

The new Empire, which will be opening its doors on Hertford Street later this year, is set to play host to Tom Clarke of The Enemy, in what has been described as a "special, semi-acoustic show".

Those in attendance can expect to hear The Enemy's classic tracks in a more intimate setting.

et to take place on Saturday, December 19, it is the first gig announced specifically for the brand new 1,500 capacity music venue.

Clarke and The Enemy are no strangers to The Empire, having played to sell out crowdsat the old Empire venue.

It is unlikely to be the first gig at the new venue, especially given that several spring events that were set to take place on Far Gosford Street are likely to be moved to the autumn - as a result of the coronavirus pandemic.

Tom Clarke himself has taken to social media to say that he will be using this gig to thank NHS workers in Coventry for their role in the fight to keep the nation safe.

He Tweeted to say that he is giving all of his guestlist spaces to NHS workers, in addition to holding back some tickets from general sale to give to healthcare workers in the city.

Clarke went on to say that: "Everybody at this gig is going to get first dibs on something very special indeed."

For everyone else, tickets go on sale on Friday April 17, at 9am.

The event, which has an age restriction of 18-plus, is set to open its doors at 7pm.

Tickets for the gig, can be found here.

Assuming we're not still under lockdown and that anybody still has a job by then?

Bosses at music venue The Empire have pencilled in April for its opening date after plans received final council approval this month.

The Empire announced its move from Far Gosford Street to 22 Hertford Street last year as part of an expansion which will up capacity from 900 to around 1,300.

A change of use of the building – a former cinema and more recently JJB Sports and DW Sports – was approved by Coventry City Council last week.

It marks the final approval for Empire’s new home and bosses have now set a date for its long-awaited opening as April 1, pending government coronavirus rules.

The venue has already announced shows later in the year which include rockers Maximo Park in September and Scouting For Girls in November.

On-going work to get the site ready includes a ‘local theme’ to new artists’ dressing rooms, starting with a theme based on city icons The Specials.

Phil Rooney, owner of Empire, said: “We have been working there since June last year so we are quite a way down the line.

“We have knocked all the walls down, built all the dressing rooms.

“We have had to put in new toilets as well and we’re putting down the carpets for the offices. So we’ve done quite a lot.

“There is not much in Coventry City Centre as a central point and for access and getting into the centre to see shows.

“As well as bringing people into the city centre from outside of Coventry it is all positive stuff.

“We are hoping to open for April 1 but that is down to the government in the current situation.”

Mr Rooney said the venue is planning to open with a capacity of 1,300 to start with, but that could be increased to 1,500 later down the line.

The venue has also teased on Twitter that it will be making a “massive announcement” this week.

They wrote: “MASSIVE ANNOUNCEMENT THIS WEEK – THAT IS NOT MUSIC!! WE’RE DIVERSIFYING.”

Empire has agreed a peppercorn lease from the city council.

Artists impressions of the brand new Empire venue show that it is set to have a balcony bar which overlooks Hertford Street.

Floor plans also show that the venue will have two rooms – a large concert space, and a smaller room for more intimate shows.

I cant see it succeeding with the lock down continuing.
Write comments
Switch to full style