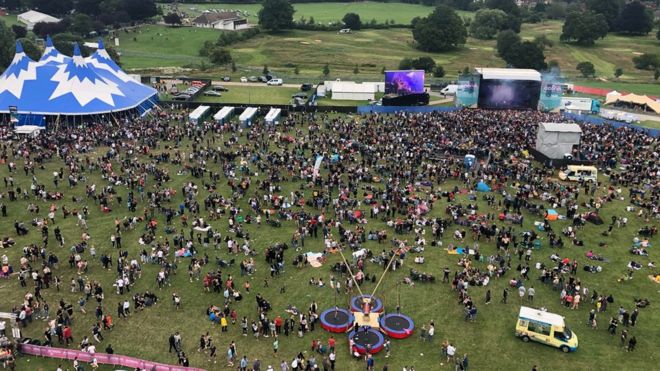 Jay1 and MistaJam were among those who did not perform after the Rhythm Tent was closed on Saturday evening.

Festival director Jon Hogan said there was the "potential for injury" as people tried to enter the full tent causing barriers by the stage to break.

The move led to criticism on Twitter, including by Jay1 who said he had wanted to perform in "my own city".

The artist, who criticised organisers, said fans had come from "Glasgow, London, Liverpool etc" and he was "extremely sorry".

"The audience volume was far in excess of what we anticipated and it was also about the audience dynamic and the way the audience move and so forth," he said.

"It's obviously sad and such a disappointment for everybody."

Organisers said the tent had reached capacity and despite a security presence and their appeals "a number of people outside tried to enter".

"This in turn caused genuine safety concerns for people already in the tent, particularly those at the front and resulted on barriers at the front of the stage being broken," a statement said.

"People continued to try and push through so reluctantly a decision was taken to cancel all remaining acts to ensure the safety of those inside."

There were some interesting tales on social media about this. Putting it mildly, it looks like security wasn't up to much and didn't handle things well. From one report I read I think it's lucky that people were not killed in a crush that happened.
dutchman

Fans have spoken of their fears they would be crushed in a crowd surge which saw the Rhythm Tent shut down over safety concerns.

Godiva Festival organisers made the decision to axe the remaining acts set to play in the tent on Saturday night, including Coventry Rapper Jay1, after huge crowds gathered and attempted to get inside.

Concerns were raised on social media about the safety of the event, with some saying people were pushing past security guards to access the stage.

Others claimed revellers had attempted to get in through the back of the tent.

Godiva Festival made an announcement on the night to say they had to take action over "genuine safety concerns".

And the festival director defended the decision saying the size of the crowd presented a 'real risk' to life .

Barriers at the front of the stage were damaged in the crush and reports at the time suggested that some fans had been seriously injured.

Organisers have now confirmed that a total of 11 people were treated by ambulance staff, two of whom were security staff, - but no serious injuries were recorded.

Joanne Lewis, who attended the festival with her 12-year-old daughter and their friends, said that she feared being crushed in the chaos.

She was waiting to get into the tent from outside at around 6pm when she said their group became so squashed they had to leave.

"People didn't know the tent was full so they were pushing to get in," she told CoventryLive.

"We were at the point of being crushed. Our feet were off the floor. It got to the point where we couldn't breathe.

"We really had to climb over people to get out."

The situation escalated "within minutes", according to Joanne, and scared her enough to not want to return to the festival again.

Joanne said: "I was probably the oldest there, everyone else was around 15 or 16.

"The scariest thing was that they clearly had no recognition of the danger they were in.

"Once we were out we realised that everyone else around was oblivious to what was actually happening in there.

"If they had let those doors into the tent open, people would have been crushed to death."

Joanne said she raised concerns with both the security team inside the festival, and the police once she was out, but said neither "seemed bothered".

She also told members of St John's Ambulance who were on scene what has happened.

"They took it very seriously," she said. "They went around the back of the tent to see what was going on."