Gyokeres strike gets season up and running

A single goal from Viktor Gyokeres secured Coventry City’s first win of the new Championship campaign on a welcome return to Saturday afternoon football at the CBS Arena.

The Sky Blues could have had more goals as they dominated the first half before being forced to defend their fragile lead after the break.

City started brightly and really should have been in front in the fourth minute when a sweeping move resulted in Kasey Palmer having a free hit in front of goal, only for the playmaker to put his shot the wrong side of the post.

But Gyokeres made no mistake in the 17th minute when he was played in behind by Fankaty Dabo, cut in from the right and slotted under Boro goalkeeper Zack Steffen to give the home side a deserved lead.

It took the visitors 28 minutes to have their first attempt at goal, with striker Rodrigo Muniz trying his luck from outside the box but not really tested Ben Wilson who was right behind it to make a comfortable stop. But Coventry continued to boss the game and Gyokeres had another attempt on goal when Palmer sent him down the left and he cut in past his marker and hit a hard and low shot which the keeper saved at his near post.

Chris Wilder’s men came into the game after the break when City were forced to play more on the counter attack. And a double substitution saw former City loan man Ryan Giles go on for the visitors and almost set up an equaliser with a piercing ball across the face of goal that had Matt Crooks sliding in at the far post by failing to connect.

Coventry were playing a dangerous game as they sat deep amid mounting pressure and were forced to defend a number of set pieces while Palmer passed up the opportunity to secure the points in the 75th minute when his attempted long range effort into an open goal went wide.

But Mark Robins's men hung on amid five nervous minutes of stoppage time to keep a second successive clean sheet and get their season up and running at home.

Coventry edge out Boro for first win of season 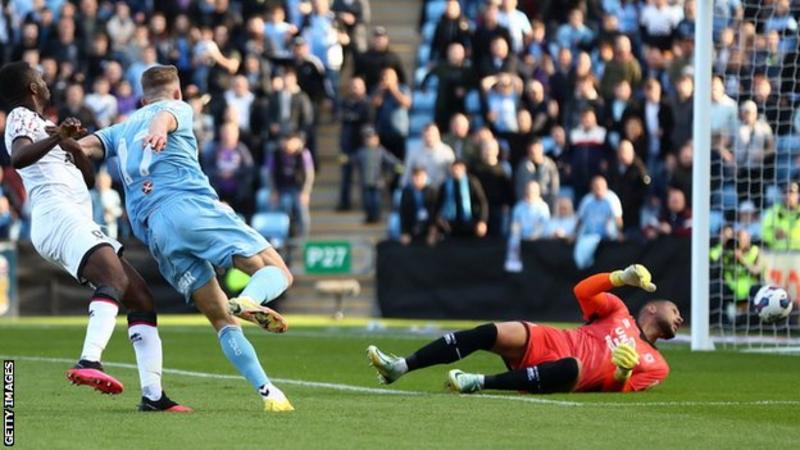 Bottom side Coventry City picked up their first Championship win of the season as they beat fellow strugglers Middlesbrough.

The hosts were good value for their half-time lead, but Matt Crooks was inches away from meeting Ryan Giles' cross as Boro responded after a second-half double change.

Chuba Akpom volleyed straight at Sky Blues goalkeeper Ben Wilson, but the hosts saw out the game for a deserved victory.

Coventry remain at the foot of the table but move to within four points of safety with three games in hand, while Boro stay 22nd after their fourth away defeat of the season.

In a meeting of two sides who narrowly missed out on the play-offs last season, it was the hosts who dominated the first half, with Gyokeres at the heart of it.

The Swede teed up Kasey Palmer who put an early gilt-edged chance wide, and then had an effort blocked by goalkeeper Steffen before he finished off a counter-attack sparked when Boro lost possession from their own throw-in.

Middlesbrough have picked up just one point on the road this term and struggled before the break, prompting boss Chris Wilder to bring on Akpom and then wing-backs Giles and Isaiah Jones.

The changes gave the Teessiders momentum, with Akpom firing straight at Wilson from Jones' cross and moments later heading a corner narrowly over the bar.

But Gyokeres had bullied the visitors' back four all afternoon and almost doubled the lead late on when his goalbound shot deflected off Dael Fry into the side-netting.

"It was a brilliant performance, a performance we deserved really. We started brightly and should have put the game to bed in the first half.

"We played some really decent football, we created opportunities and we opened them up.

"It was the first game played at home on a Saturday in the season and it's the first of October, but now you can feel things changing because the players know we're going to be playing.

"The pitch is in really good nick - we have to give them credit for that - so that's fantastic and we can get on with things. It feels like the first game of the season for us."