Coventry City have signed former Wigan striker Marlon King on a one-year contract, after a spell training with the Championship club. 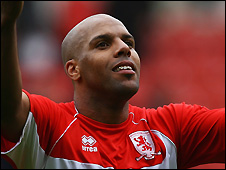 "I am very grateful for the chance Coventry City have given me and I look forward to working with Aidy again," King told BBC Coventry & Warwickshire.

King was jailed for 18 months after being found guilty of sexual assault and was released from prison in July.

The striker was a Wigan player when he was jailed but is now a free agent and has vowed to clear his name.

He has also played for Barnet, Gillingham, Nottingham Forest and had loan spells at Leeds and Hull.

King added: "I will be working hard to repeat the success [Aidy and I] had when we last worked together."

Boothroyd said: "He's been working very hard with us in an attempt to regain his fitness. He has looked sharp in training and in a couple of reserve matches but we will have to assess very carefully when he is ready to step into Championship football.

"When I managed Marlon at Watford, he was a first-class professional and I fully expect that to be the case at Coventry."