Coventry have completed the signing of Bolton winger Danny Ward on a youth loan until January. 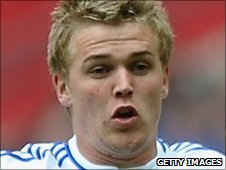 The 18-year-old joins the Championship club after signing a new three-year deal with Wanderers earlier this week.

Ward scored nine goals in 31 games during a loan spell with Swindon last season, helping them reach the League One play-off final.

He told the Coventry website: "I'm very happy to be here and hopefully it means I'm getting games under my belt."