Coventry City keeper Keiren Westwood will play on for the club after clear-the-air talks with boss Aidy Boothroyd. 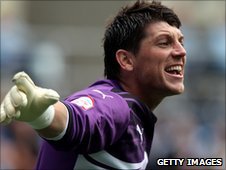 The 25-year-old Republic of Ireland player, who is out of contract in the summer, was dropped after a public spat over whether he would sign a new deal.

Boothroyd said: "Players have a right to run down their contracts, but I would love him to stay.

Westwood is now likely to start in the Sky Blues' Championship clash against Leicester on Saturday after missing the club's previous match against Millwall.

Meanwhile Boothroyd has revealed he is hoping to conclude a deal to bring Marlon King and Bolton winger Danny Ward to the Ricoh Arena.

King, 30, had his contract terminated by Wigan after he was convicted of sexual assault and causing actual bodily harm.

He was released from prison in July and has been training with his former boss from his time at Watford recently.

"I'm hoping, fingers crossed, we can get Marlon in for the weekend, we're very close now," Boothroyd continued.

"There are no problems at all (regarding the hold-up), it's just a very delicate situation and the club are being as professional as they can be in making sure everything is right for the player and the club.

"It's not if, it's when. The quicker the better for me and I'm hoping we can do that."