Coventry City have appointed Colchester boss Aidy Boothroyd as their new manager on a three-year deal. 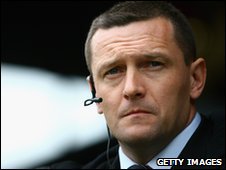 The clubs have agreed a compensation fee for the ex-Watford boss, 39, who took over at Colchester in September.

Notts County manager Steve Cotterill was believed to have turned down the Sky Blues job on Wednesday.

Boothroyd succeeds Chris Coleman, who was sacked after City finished 19th in the Championship, and becomes their ninth permanent manager in 10 years.

He told the club website: "This is a big club and a big challenge but is one I am very much looking forward to.

"The potential is here - from the financial stability to the magnificent Ricoh Arena - and I am very much looking forward to getting on with the job."

Boothroyd took over at Watford in March 2005 at the age of 34 and led them to the Premier League the following season, before their relegation after just one term.

He left the club by mutual consent in November 2008 with the club sitting 21st in the Championship table, and took over at Colchester 10 months later.

He led the U's to eighth place in League One this year after succeeding Paul Lambert.

Coleman lost his job after a late-season collapse for the second season running. The Sky Blues have finished 21st, 17th and 19th in the previous three seasons.

Coventry chairman Ray Ranson said: "He is considered to be one of the brightest young managers in the English game and we believe he can take us to the next level.

"We look forward to working with him in the coming weeks, months and years as we bid to get Coventry City back where it belongs."

Well, I'll give him a fair crack of the whip. Hasn't exactly set my pulses racing but he did get Watford promoted.
ironskyblue

I know he's not the most exciting manager we'll ever sign, but I'll judge him when the time is right. One big plus is that I do honestly believe he'll get a good squad together on a limited budget, as he did so at Watford. At the end of the day, if we win more than we lose and can get at least somewhere near the right end, rather than dying off like a fly in a bottle, I'll say he's done a good job. Why there is so much rubbish negativity fying around from some fans about him before he;s even started, I'll never understand.

One rumour that may start flying around is a possible return for a certain John Eustace, as Aidy took him to Watford I believe. Would he be keen to follow, maybe complete some unfinished business?
pollyanna