Notts County manager Steve Cotterill has turned down the chance to take over as boss of Championship side Coventry City, reports BBC Radio Nottingham. 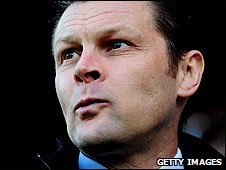 Cotterill, who joined Notts on a short-term deal in February and guided them to the League Two title, was offered the job after talks earlier this week.

But the 45-year-old is now expected to stay at Meadow Lane after lengthy talks with chairman Ray Trew.

Coventry have been managerless since sacking Chris Coleman in early May.

Cotterill has so far not revealed his reasons for rejecting Coventry's overtures and seems likely to stay on at Notts after being offered improved terms by Trew.

Former Burnley and Cheltenham boss Cotterill, who only has two weeks left on his contract, made a huge impact at Meadow Lane after being appointed by the new owners.

In 18 league matches, he oversaw 14 wins and only lost once, conceding just six goals during that spell.

Cotterill was linked with the manager's role at the Ricoh Arena last week and was made one of the favourites for the job by bookmakers.

But at the time he said he had not had any contact with the Championship side.

He told BBC Radio Nottingham: "It is flattering but I'm level headed. I don't get carried away with anything.

"I absolutely don't know any more than I have read."

The man is clearly insane. Rejecting the chance to manage the mighty Sky Blues in favour of staying put at Notts Irrelevant. How he will rue this day!