Sheffield Wednesday manager Alan Irvine has said that he has no interest in leaving the club for Coventry City. 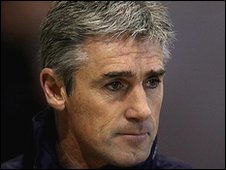 The 51-year-old has become one of the bookmakers' favourites to replace Chris Coleman at the Ricoh Arena.

"I got a surprise the other day when the chairman Lee Strafford told me I was 6/1 for the Coventry job," Irvine told BBC Radio Sheffield.

"I can assure people I'll not look for another job. I am not running away from the League One situation."

Wednesday were relegated to English football's third tier after failing to beat Crystal Palace on the final day of the Championship season.

Coleman lost his job as Coventry manager following their 4-0 home defeat by Watford on 2 May, the Sky Blues finished the season in 19th place.

Re: Alan Irvine not interested in Coventry City job

Thank goodness for that, I certainly don't want him as manager!