Coventry City's on-loan striker Jon Stead believes the play-offs are a possibility after they moved to within three points of the top six. 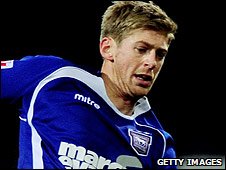 The 26-year-old is on loan from Ipswich and scored on his home debut in the 2-1 victory over Scunthorpe.

He told BBC Coventry & Warwickshire: "We're in a fantastic position but it's going to take a lot.

"You see teams sneaking into play-off places. If we keep winning games you never know."

Stead arrived at the Ricoh Arena from Ipswich Town in February and is set to remain with Coventry until the end of the season.

Saturday's victory over Scunthorpe was Stead's third appearance for City and he was pleased to have opened his account with the club.

He said: "I caught it sweet and it went through bodies so I worried someone might get a nick and steal it off me but it went straight through and inside the post.

"It is important to get my goals but I'd sacrifice all my goals at the end of the season if we keep picking up results like that."