Newcastle have completed the deadline-day signing of striker Leon Best from Coventry for an undisclosed fee. 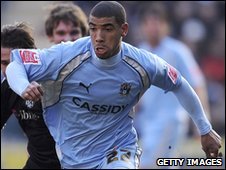 The 23-year-old has put pen to paper on a three-and-a-half year contract and will go straight into the squad to face Cardiff at St James' Park on Friday.

The Republic of Ireland international has been handed the number 20 shirt.

Best's contract at Coventry was due to expire in the summer and, even though a fee would have been due as he is under 24, the Sky Blues have cashed in now.

"The situation with Leon's contract has been well documented," said chairman Ray Ranson.

"When it was apparent that we couldn't agree terms for him to remain at Coventry, we knew we would have to listen to offers and act in the best interests of the club."

He joins the Coca-Cola Championship leaders having spent two-and-a-half years with Coventry following his 2007 switch from Southampton.