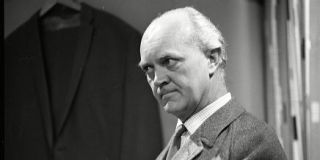 Former Coronation Street actor George A Cooper has passed away at the age of 93.

The actor's family confirmed that Cooper had died on November 16 at a Hampshire nursing home, although his cause of death is currently unknown.

Cooper had a recurring role on the cobbles as businessman Willie Piggott, appearing in the ITV soap from 1964 to 1971.

An unscrupulous businessman, Willie bribed teacher Ken Barlow to give his son Brian a pass in an exam and persuaded honest Emily Bishop (then Nugent) to spy on his business rival Len Fairclough. He also took a bit of a shine to Street siren Elsie Tanner.

He is also known for his role on BBC children's series Grange Hill as caretaker Mr Griffiths, a part he played over 103 episodes between 1985 and 1992.

His 30-year career also saw him appear in Casualty, Heartbeat, Steptoe and Son and Rising Damp, as well as in theatre productions on London's West End.

Cooper is survived by his son Adam, who he had with his late wife Shirley. A funeral for the actor will be held at Chichester Crematorium on December 6.

He was a brilliant bit-part actor!