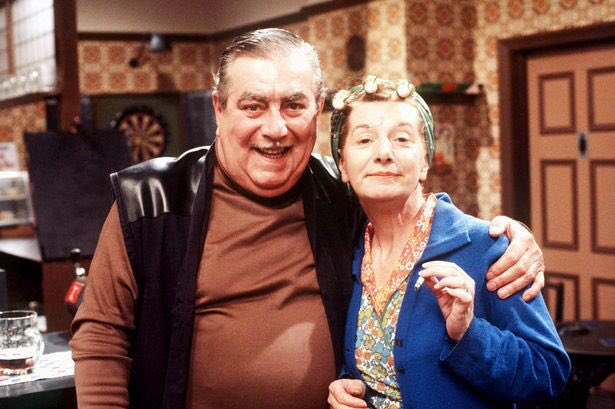 She played the part of sharp-tongued cleaner Hilda Ogden for 23 years until 1987 and retired from acting four years ago.

The actress was also known for her role as Auntie Wainwright in Last of the Summer Wine, which she played for 22 years.

The episode in which Hilda Ogden left Coronation Street, on Christmas Day in 1987, attracted a record-breaking 27 million viewers.

The character, who was married to Stan (Bernard Youens), was known as an enthusiastic gossip with a tendency for malapropisms, most memorably her treasured "muriel" - her wall decoration.

She was most often seen in a pinny with a set of rollers in her hair as she cleaned the Rovers Return, a look she said was inspired by the women who worked in munitions factories in Liverpool in the Second World War.

Young women would tie up their hair to stop it getting caught in the machinery, she once explained, and would wear curlers so that they were ready to go straight out in the evening.

Hilda did the same - although "she never did go anywhere that was worth going to," Alexander said.

In 2005, she was voted the greatest soap star of all time in a UK TV Times poll.

After winning the poll, she said: "It's unbelievable that people are still so fond of Hilda.

"We had so many wonderful individual characters when I was in the show, Ena Sharples and Elsie Tanner come to mind, so to be picked out from amongst that crew is very, very flattering."

Born in Toxteth, Liverpool, she started her acting career in 1949 and made her television debut in the police series Z-Cars.

She first appeared in Coronation Street in 1961 as landlady Mrs Webb, returning three years later as Hilda, and went on to win a Royal Television Society Award in 1985 for the role.

She played Auntie Wainwright, the money-grabbing local junk shop owner, on the long-running sitcom Last of the Summer Wine, from 1988 to 2010.

Ms Alexander announced her retirement in 2012, two years after her last television appearance, following an acting career which lasted more than 60 years.

I prefer to remember her as Auntie Wainright in LOTSW.