Theresa May today challenges Jeremy Corbyn to a live Brexit TV debate, set for December 9 — the night of the I’m A Celebrity final 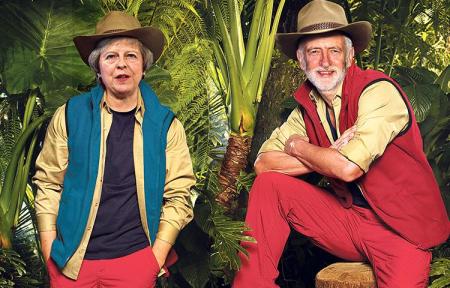 The PM uses an interview in The Sun to lay down the gauntlet to the Labour leader.

She wants to expose what she insists is the Opposition Leader’s failure to offer any workable alternative to hers for leaving the EU.

The primetime TV clash will now be the climax of Mrs May’s titanic two week fight to win MPs’ support to save her controversial divorce deal.

“I am going to be explaining why I think this deal is the right deal for the UK - and yes, I am ready to debate it with Jeremy Corbyn.

The PM hopes a slam dunk of Mr Corbyn with her command of the deal’s full details will win round wavering Tory MPs.

Downing Street has set a provisional date of Sunday December 9 for the TV debate, just two days before the showdown meaningful vote on the deal in the Commons - confirmed yesterday for Tuesday, December 11.

But that clashes with the finale of this year’s ITV series I’m a Celebrity...Get Me Out of Here, also being shown on the evening of December 9.

But senior Tory Eurosceptic Sir Bernard Jenkin argued a Brexiteer should take Mr Corbyn’s place against Mrs May, saying it should not be “polarised between a Remain Labour Party and a Remain PM who has negotiated a Remain Brexit”.

Mrs May famously ducked out of appearing in any of the TV debates during last year’s general election campaign, a move that was pounced on by her critics.

Mr Corbyn held back from immediately accepting the PM’s challenge, with his aides saying he will await a formal approach from No10.

A Labour Party spokesman said: “Jeremy would relish a head to head debate with Theresa May about her botched Brexit deal and the future of our country”.

Re: Theresa May confirms live TV Brexit clash with Jeremy Corbyn on the night of I’m A Celebrity final

BBC drops plans for Brexit TV debate between May and Corbyn

The BBC has dropped plans to hold a Brexit debate between Theresa May and Jeremy Corbyn, saying it "could not reach an agreement" on its proposal.

Both it and ITV offered to air a debate between the leaders on Sunday - two days before Parliament votes on Brexit.

But Labour had said the BBC's proposed format was a "mish-mash, with a lop-sided panel of other politicians and public figures" taking part.

No 10 said Labour's objections were "false and flimsy".

The BBC had wanted to include "a range of voices" in the programme, including members of other political parties, as well as a head-to-head between the leaders.

The Downing Street spokesman said: "We remain committed to holding a debate and will continue to press for a format that ensures a range of voices are heard alongside a substantial head to head."

Several other parties had said they should be included in the debate - including the SNP, Lib Dems, Plaid Cymru and Greens.

ITV says "invitations remain open" to both leaders to hold a debate on the channel this Sunday.

Re: Theresa May confirms live TV Brexit clash with Jeremy Corbyn on the night of I’m A Celebrity final

ITV has cancelled plans to host a live Brexit debate between Theresa May and Jeremy Corbyn on Sunday.

The announcement comes after the BBC also abandoned a proposed programme earlier this week, meaning there will be no televised debate between the two party leaders ahead of next week’s parliamentary debate.

It follows a week of discussions between political parties and rival broadcasters over the set-up of the debate and who would host it.

Both Labour and Downing Street have accused each other of “running scared”.

An ITV spokeswoman said: “ITV invited the Prime Minister and leader of the Opposition to appear in an ITV programme this Sunday evening, and we have been clear that it is up to those invited to decide whether they want to accept the invitation."